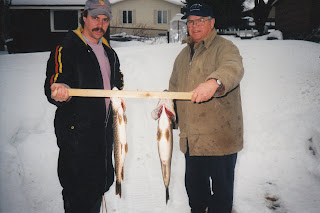 Yesterday my buddy Joe dropped in to the office. He gave me the lowdown on all the recent Waubaushene happenings and I caught him up on the goings on in Coldwater.

At some point during each visit he scolds me with "what's that buddy, you haven't been fishin?"

"Why the hell not." I generally have some weak excuses....too busy, too cold, not cold enough,too much slush, ice is too thin, ice is too thick, and so on. Truth is, I should get back into it. It is a great sport but more importantly a good way to pass the winter. (you know, when we are not shovelling snow of course.)

There was a time when I spent most early mornings and as well just before dark staring down an augered hole in my dad's "shack" on Georgian Bay. I guess it was more his influence and my wish to hang out with him than true love of the sport that kept me going back.

We did pretty good too...or should I say he did, at least. While most of the "fish catchin" was done by either Dad or my son-in-law Peter (Known as the "fishin magician") I also had my moments.

The attached pic shows one of my luckier days. Me with a respectable pike and Dad with a nice walleye. I caught the pike on a homemade wooden lure that was crafted by my Uncle Bob and given to my Dad as a gift. It was a favorite of dad's and referred to, by him as "the pike killer"
Since Dad's passing in 2002 his old hand made wooden plug has laid idle amongst countless other lures, equally as memory filled.
Maybe I should have a look through them.
Maybe the "pike killer" should be selected, and deserves a place of honor desplayed beside a picture of Dad.
My buddy Joe did get me thinking about ice fishing.... but an afternoon spent going down memory lane with my Dad's old fishing stuff sounds pretty good too....and a hell of a lot warmer than a trek out on the ice.
Posted by Severn Soundings at 11:38 AM No comments:

The thing about the weather is that, other than talk about it there's little else that a person can do but witness it.
When the temperature goes up and the snow starts to melt and the rain starts to fall, announcing yet another winter thaw; there's little else that we folks in Coldwater are talking about.
We all keep one eye on the river and one eye on our sump pumps.
The thaw at Christmas time was even made more interesting by high winds and the inevitable power outage that follows this chain of events.
That's when the drone of dozens of generators can be heard filling the air with their monotone chorus until the last available unit is gassed up and fired up, joining the choir.
But enough about how we here in "the north" spend our Christmas holidays.
The bright side of a late winter thaw is that it gives us a little glimpse of things to come.
That indeed, spring is just around the corner, and before we know it, we will be back in the boat enjoying all the wonders that our spring/ summer seasons have to offer.
For now I guess I'll just watch the river for the next couple of days and make the best of whatever the weather has to offer.
Who knows if the fair grounds fill up with water again, and now that I'm in the boating mood; I'll grab my trusty kayak and like I said "make the best of it"

Posted by Severn Soundings at 1:06 PM No comments:

THE START OF THINGS TO COME

As I sit here contemplating the prospect of becoming a half a century old tomorrow, I thought now would be a good time to try my hand at writing a blog. A journal of sorts, organizing some of my mind's ramblings and putting them to paper (so to speak).
Posted by Severn Soundings at 2:09 PM No comments: