Some of the best relationships in life get off to a rocky start and then seem to "hit their stride" and blossom as you recognize the benefits of being together and what each of you bring to the table, both emotionally and in a practical sense.

No I'm not having a "Doctor Phil moment!" I'm referring to the friendship that has evolved from a tenuous first few months of having an infant in the house to what exists between a young boy and an old dog today. A dog tends to react to, and takes his cue from, whatever mood or atmosphere that exists within his pack (family) at any given time. This is the reason that it is said that generally unstable humans make for unstable dogs. Even the most stable packs with the most calm, confident, leaders suffer from a little instability when a new member/baby arrives. Even before baby arrives there are new feelings within the family that the dog senses and in his mind must follow suit, like great joy (and in our case great surprise), excitement, anxiousness, nervousness and perhaps a little apprehension.

Our dog responded by staying close to his momma whenever he could, his nature changing somewhat from his happy-go-lucky demeaner to one of protectiveness and concern.
So it was no surprise that when Jax came along his arrival did little to calm our aura. This little creature, thrust amongst the pack, brought with him sights, sounds and smells that were foreign and unwelcome to an adult male with very little in the way of maternal instincts or nurturing tendencies, and I suspect the dog didn't like it much either! (Just a little humour! Of course I meant the dog!)

Seriously though, the first interactions between infant and dog were few and were strained at best. The little guy made the old dog nervous, and whenever things went wrong, he was always the one to receive the scolding. Come to think of it, things often go that way with me too, when I am left in charge of keeping the young boy out of harms way.

Now, I should say it this point that I, a veteran of  raising his five siblings before his arrival, am far better equipped to keep the boy safe than a golden retriever. (Well maybe not far better, but better at least.) Jax has grown from infant to toddler to young boy in his two and a half years of our family's life. Where there was once uneasiness and anxiety between the child and his dog, there is now understanding and a kind of friendship.

Our old boy, and perhaps "this old boy" as well, have reckoned themselves to Jax being part of our pack. We quickly learned that this young man is generally the centre of attention within the household. By positioning ourselves near the boy the dog and I often receive scraps of food, as there seems to be a never ending supply of snacks offered in the young lad's presence. Incidentally, close proximity to him also occasionally awards me with a shred or snippet of the warmth and attention that was once lavished upon me in my pre-Jax years, but that's getting off track and sounds like a good topic for a another post! 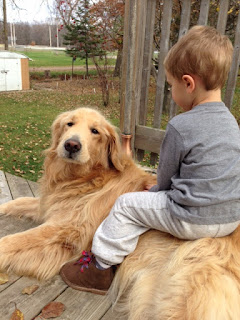 Yes, boy and dog seem more and more every day to be better friends and have more in common. At two and a half years of age Jax frequently exhibits behaviours such as afternoon naps, running through puddles, eating food off the floor, inappropriate public grooming and occasional howling for no apparent reason. Jackson displays these and as well continues one that Jax has thankfully mostly discontinued, a penchant for chewing his toys and eating the bark off sticks in the yard. 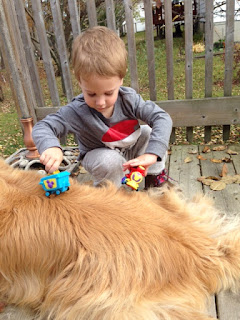 All in all Jax would say that it's nice to have a dog as a friend. Someone to eat your vegetables for you, someone willing to share his kibble and treats with you, someone to provide interesting terrain for your toy trucks, the list goes on. 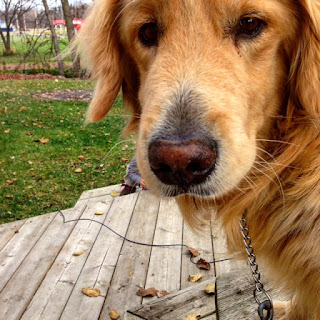 I think that their one area of disagreement might be Jax's fascination with flushing toilets. It's a nuisance when you are trying to get a drink!

Posted by Severn Soundings at 9:31 AM No comments: