As a younger man, I recall finding the value in a job well done, the completion of a task, the satisfaction of repairing one's own possession's, with nothing but the most basic of tools, a little know how, a lot of ingenuity and an abundance of free time. All of this, coupled with a near complete absence of funds, made me a DYI guy rather than have someone far more qualified do the job right! As far as car repair goes I suppose I've done my share.

One of my earliest solo endeavors would have been the time I changed a set of springs at the age of 16 on a car that was at least 16 itself. This, of course, was done in the front yard of my Dad's house armed with just the most basic of tools and youthful enthusiasm on my side. The car was a Pontiac Stratochief. I, of course, called it "The Stratollac," reckoning, I guess, that people might confuse it for a Cadillac.

I bought her for $75.00 out of the back yard of an older couple (in those days that meant 40+ years) from Victoria Harbour. Inexplicably they had left her there to languish! There was little wrong with that car that a bit of mechanical repair and a lot of "bondo" and fibreglass couldn't fix. By the time I was done grinding and patching, both rear quarter panels from back door to tail lights were "of my own creation." The resultant weight, and  possibly my "spring repair job," made her a "low rider." I was truly ahead of my time and didn't know it!

A perhaps less than thorough, but much appreciated safety check by a friend of a friend, and a form of insurance known as "unsatisfied judgment," and I was driving! I loved that old car, and it loved me back. Sure, we had our occasional spats, but I learned that she just needed a little more attention than some. Fluid levels, performance loss, and faint but recurring noises, were not to be ignored. The plans of an enjoyable evening could be squashed at a moments notice if she sensed the slightest indifference from you! Sound familiar, fellas?

Anyyyways...back to cars. As we all know, getting and keeping  a car "on the road" is a little more complicated than that these days! Speaking of these days...it was just the other day that we were discussing the need for some brake work to be done on my wife's car when my stepson  Jeff mentioned that he had done lots of that sort of thing all the time on cars during an auto mechanics class in high school.

That's when I felt that pesky "youthful enthusiasm" well up in me and I found myself suggesting that we just take care of the job ourselves in the front yard! Just like the ole days, eh! We checked the weather and tomorrow's  promise was a mostly sunny six degree day, which sounded not bad if you didn't think too deeply into the effects of windchill and how much gusts of 35km/hr would influence the atmosphere on the ground, under a car next to ten acres of open fairgrounds. 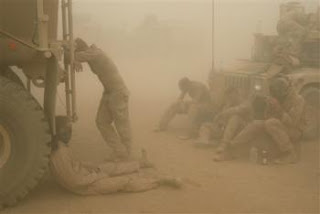 By the time we finished that "little brake job" Jeff was near his "braking point." Frozen fingers struggled to disassemble and reassemble cold steel objects as the long hours had passed, lying in what was becoming a sand dune around the car. We had sand in nearly every orifice (boxers had nothin' on briefs that day). Through grit filled eyes, a grimace on his face, and a single tear on his sand stained cheek, Jeff compared this ordeal to changing a track on a tank on the roadside in Afghanistan.

I marvelled at how he could make that comparison since most of his battle experience, that I know of,  has been leading combat missions against Taliban strongholds from the comfort of my couch in our rec room, using only his thumbs to wreak havoc on the enemy! 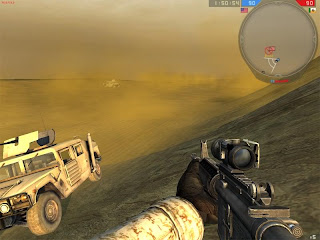 As the car was finally nearing road worthiness once again, we pondered the degree of difficulties we had encountered. My suggestion was to blame the weather, but Jeff said that the trouble was due to the fact that he was not used to working on "older" cars! Huh? We bought this thing in 2008!! How friggin' new were these cars that you worked on? And how was it that they needed brake work?
Twentysomethings today all feel that "newer" is somehow better, and feel entitled to have all new things. This is totally foreign thinking to me! Especially when it comes to vehicles!
Everyone knows that it takes at least a decade of use before a car or truck fully develops it's character. Just take, for example, my dear old "Stratollac"...


Posted by Severn Soundings at 2:13 PM No comments: