COME VISIT US AT OUR WARM AND COZY NEW OFFICE ON THE SUNNY SIDE OF THE STREET. WE ARE NOW AT 15 COLDWATER ROAD, COLDWATER (FORMERLY BODY ESSENTIALS).
Posted by Severn Soundings at 1:55 PM No comments: 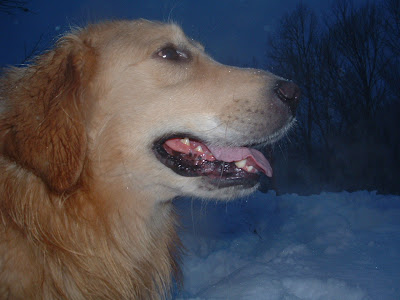 A frigid February morning...6 a.m....temperature hovering at -20. The dog bounds ahead then excitedly circles back, as if to say, "isn't this the best day ever?"


His happiness is partly due to youth and exuberance, and partly due to the " live in the moment" wisdom possessed only by a canine, that "indeed, every day is the best day ever."


His breath hangs suspended, ghostlike around his muzzle, that even now shows signs of "whisker frost," illuminated as we pass beneath a nearby street light.


As we begin the serious business of our morning "coyote patrol," my steps make that familiar crunch of snow under foot that is only heard on mornings such as this one.

Immediately my mind's eye is catapulted back 10 years to a similar morning.


As I walk down the hill, my old dog Manci in tow, I look up to see the kitchen window light on welcoming me. The front door is ajar, I enter, then drop my old green jacket by the door.


My coffee is on the table waiting for me. Dad stands at the counter. His teaspoon rattles it's early morning tune on the side of his cup as he stirs honey into his. Silence otherwise.


"Toast?"...is his one word question. Still facing the counter, he curses the honey for it's grip on his spoon. I whisper, "Oh well, guess if it's good for ya it's worth the effort, eh!"

"Once we're settled in the shack, think I'll take a run up towards the "light house," see if I can't scare up pickerel there."


Charley Tucker was saying, "there's no ice up there." No response...just two last taps of the spoon and the crunch of a piece of toast being bitten into.


I had no real worry for him, as he was well aware of ice conditions and had fished that lake all his life, knowing where the currents ran and where the shoals wore the ice from beneath.

Two hours later found me staring down at the bottom of Georgian Bay through an augured hole in the relative darkness of Dad's fish shack. I could hear the soft "woumph" of snow hitting the base of the shack as Dad "banked" the sides, darkening the interior and improving my view.


"Well," I said, in a challenging tone (mimicking Dad's tendency towards "one word questions").


"Well, yourself." "What were you doin here?" I shook my head in silent resignation, no longer taunting "the big dog."


Having dealt with me...he decided to respond. "Me, aaauhh, I didn't get to where I wanted." "Fella would have to pernt-near troll up there!" We both laughed. 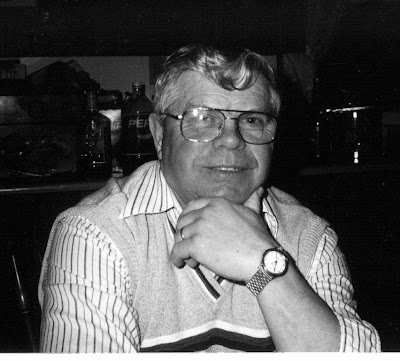 In my mind it's like that was yesterday, yet in reality Dad will have been gone a full decade next year.


He is often in my dreams, just one of a group of people in an ordinary conversation, always looking healthy, always I seem to be the only one that thinks it's strange that he's there!


I find myself staring at him stupidly, til he turns to me.


I say, "Well...what are you doing here?" He says, "Well, yourself, what are YOU doin here!" I smile and think I just got told again by "the big dog." (Something I like to call myself these days when dealing with today's young lads.)

Posted by Severn Soundings at 5:53 PM No comments: