Mid June this year found me and Lisa another agent, busy as usual, and on this particular day doing a bit of rock climbing.


The rock climbing was necessary to get the best pictures and best road and boat access exposure of our signs at a brand new listing.


The property we were listing was a road access vacant lot on the Trent Severn Waterway at Marr Lane (just east of Big Chute).


The landscape in that area is rugged yet beautiful.


As usually is the case, it consists of steep outcroppings of granite with pines clinging precariously on ledges or with their roots wedged firmly into deep narrow crevices carved by an advancing/retreating glacier ages ago.


Clinging precariously to those above mentioned pines were two fearless Remax agents, abandoning thoughts of their own personal safety in pursuit of providing the highest level of service to their client...that sounds right, eh?


While that pretty accurately describes Lisa; I on the other hand was watching intently, from a safe plateau...shouting out encouragements and reminding her to "be careful, for God's sake."


If she lost her footing and fell I would be forced to formulate a plan and mount a rescue attempt and I; in my usual "cottage country realtor" uniform of "sandals and shorts" was not dressed appropriately for any of this...besides...she had my new drill with her!


After signs were mounted and pictures taken and during her assent up the steep rock outcropping from the water's edge to the relative safety of level ground where I awaited, she discovered something...


That something was that it was not only I that was watching...


There was a rattlesnake lounging lazily on the same ledge that she had just traversed on her way down!! 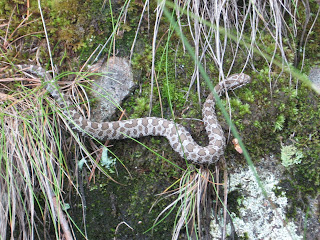 
Even as she unknowingly approached it on her return the snake did not show signs of fear or malice for that matter...hardly the monster depicted in movies and pop culture!


I was quick to point out that, since Lisa was already in danger and the snake seemed obliged to pose, she may as well get some pictures!!


After his photo shoot the snake went back to sunning itself on the rock and taking a slightly different route, Lisa returned, unharmed, but a little shaken by the encounter.


Posted by Severn Soundings at 9:33 AM No comments: