It was a Thursday, a couple of weeks ago and for November...it was indeed a grand day !

I gave a call to a friend of mine Carl, and questioned him as to his intentions that sunny mid week day.
His intentions were of were of course, ridiculous ....something about going to work, trying to make a living, not having the luxury of drifting in and out of the office depending on one's mood that day, like us real estate types.
I said ya; the responsible thing to do would be to stop looking out the window and get some business done.
Being distracted by the view is nothing new for me of course.
I may have never moved on from my grade six classroom, (across from a public park full of frolicking squirrels) had it not been for Sister Mary Macdonald's intervention, closing the window shades next to my desk.
Anyway back to Carl and the day at hand.

After feigning agreement with him I brought the conversation around to his project up on Deer Island, commenting that I had not been up there lately to check on his progress, and suggesting that I take a look when we get another good boating day....like there would be one !!

That was it; plans were changed, paperwork pushed aside, appointments and phone calls put off, and in his case, "numbers would have to be crunched" another day ! 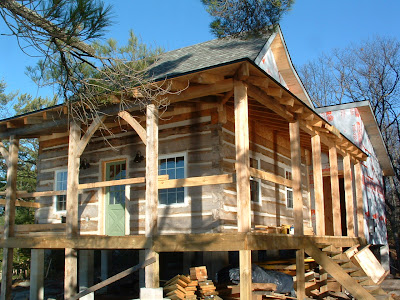 In an hour, we were on the sun sparkled waters of beautiful Gloucester Pool. 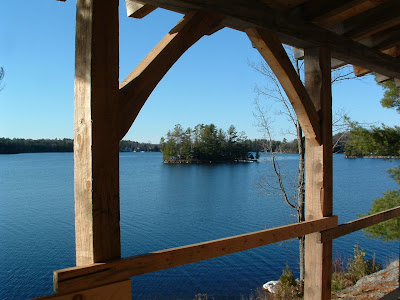 His truck, his boat, his gas and his beer ! .....How's that for the powers of suggestion from a kid who was scolded in grade school for daydreaming.
It all started with me staring out the window instead of getting work done and come to think of it that's how this day started too !


Once we arrived at the island Carl gave me the grand tour of his newly constructed retreat and pointed out his further intentions and ongoing efforts.

The building is predominately a log building with a framed annex to the rear, housing the kitchen, bathroom and a main floor bedroom.

Every where one looks reflects the craftsmen ship and care that goes into a structure such as this. I marvel at the way the logs fit together and the thick sturdy walls that result. 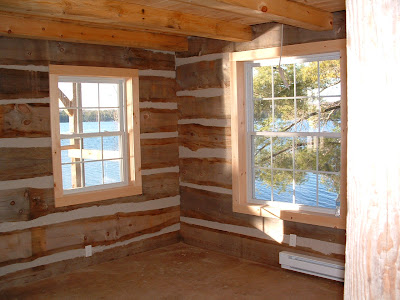 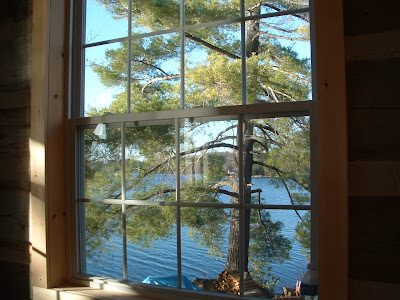 Looking through the windows from the inside this building seemed to showcase the natural wonder beyond. 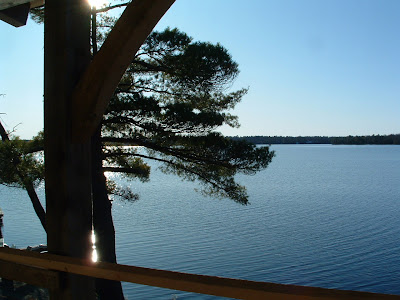 But the real sensory treat was from the covered porches just a few yards back from the water, over sun warmed granite outcroppings, littered with fragrant pine needles; the amazing vista to be witnessed across the Pool, west towards a setting sun !

Carl tells me that he had a hand in every aspect of the building, assisting the pros wherever he could. (In truth, he is much handier and more capable with this sort of a venture than I would let on to you; and certainly to him.)
This building was erected using much the same footprint as the building that formerly stood there, and in that way mirrors the original, which I believe had stood on that spot since around 1910.
The first old cottage being an uninsulated, modest frame structure, that time and the elements had taken their toll on so, similar footprint and same location near the waters' edge, but that's where the similarities ended.
After discussing window choices and flooring choices and overall design; we talked about what Carl and his wife's vision was for finishing touches in the coming year.


Having begun a similar project in lost channel I was keenly interested and hopeful to come away with any tips I could about construction and finishings. 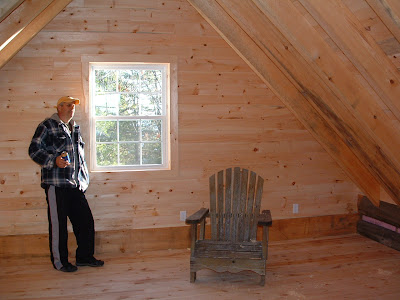 Carl was also kind enough to allow me to snap a few pics of his work in progress and as you can see, I decided to share them with you.

All in all it was a great day for me.


I think worthy of anything that my daydreaming would conjure up.....I know, I know ........pretty mediocre stuff to be writing about....after all I am just a regular guy....I'm no Tiger Woods....my life is not nearly that interesting, but guess what....I bet I'm feeling alot more relaxed these days than he is.
Posted by Severn Soundings at 2:53 PM No comments: