A TALE OF TWO LAKERS!

It was a sunny, early May afternoon as I recall. My partner Brenda and I were diligently absorbed in the matters of  real estate sales (well that's how I remember it anyway). I must have momentarily looked up and away from my desktop, perhaps to unkink my work weary neck, when I caught a glimpse through the window of a somewhat weathered fishin' cap above a somewhat weathered face directly over an "Old Guys Rule" sweatshirt.

After some polite exchanges and  inquiries as to how Brenda was doing, there was of course, the usual sympathetic words about the trials she must face with not only having a business partner like me, but puttin' up with yours truly at home as well. Carl's conversation eventually swung from an indepth analysis of my work ethic (or lack thereof)  to the weather, to fishing, to fishing stories, to a fishing story about "this time of year" a couple of years back.

It was an intriguing story about what Carl called "ice out lakers." It seems that "these very days" each year there exists the exact conditions on a lake up north required to put massive lake trout "on the bite," as Carl would say. He then casually produced a set of  fishing regulations, which he just happened to have, and low and behold there was just such a specimen of that exact species on the front cover! It was at that moment that I realized that it was Carl that was on "the bite!"

I sat back and watched the master as he navigated the conversation from when is it that Doug actually works a full day, to when was it that the poor boy had a couple days off, to the inception of the idea that a couple of days right now would serendipitously coincide with "ice out lakers."

I forget just who said what, or who's idea it was, or if there was any begging involved on my part, but my "everlovin" graciously volunteered to take care of things in my absence, and the next day found Carl and I in his Dodge Ram, boat in tow, headed north, grinning like a couple of Cheshire Cats! 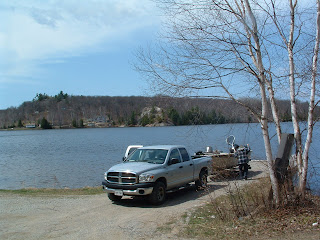 Now, day one of the expedition went good, maybe too good. The trip up and subsequent launch of the boat went off without a hitch. The boat ran like a dream! The "skipper," well, as the song goes, "he was brave and sure." 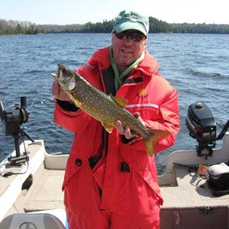 One reason he was so sure of himself  was that he once owned a camp on this lake, so the place was right, the time was right, he knew the shore to troll and the depth and speed to be at. I had my first fish on before I figured out the correct use of the downriggers! The next hour of that beautiful, sunny day brought three more lakers, each one larger than the last! 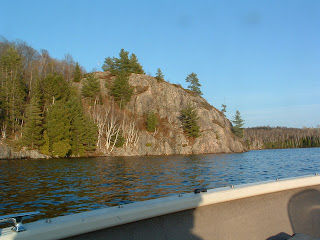 Such quick success, of course, brings arrogance in even the most modest of men, so the decision was made early on that today would be all "catch and release" and tomorrow we would keep one each, and in this way I could keep my promise to bring one home for Brenda. I doubt if she truly cared, but the idea stirred an instinct deep within my male psyche that I must hunt/fish and provide much the same as my male retriever "must" find a discarded plastic bottle before returning home each day from our morning foray! He doesn't need a plastic bottle any more than I needed the fish! And I don't mean to compare myself exactly to a 100 lb. canine, after all I am taller and have somewhat better manners and hygiene, well  hygiene anyway.

A truly charmed day came to an end that evening at the motel when all of the fresh air, excitement and enthusiasm of the day, coupled with a couple of celebratory refreshments, eased me into a deep restful sleep, the kind of sleep that sounds a lot like a McCulloch chainsaw chewing through a hard piece of oak. At least that's what I'm told anyway. 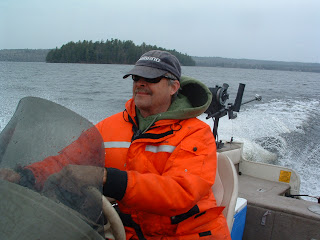 The next day came, and with it, the anticipation of easy victory, but despite our best efforts, the effects of a cold front moving through could not be denied. There was a heavy chop on the water, a relentless wind that buffeted our boat making trolling speed erratic, and even a big sturdy boat like our trusty Legend lurch and list. The rains came in just as we wisely pulled the boat from the water and began our journey home. 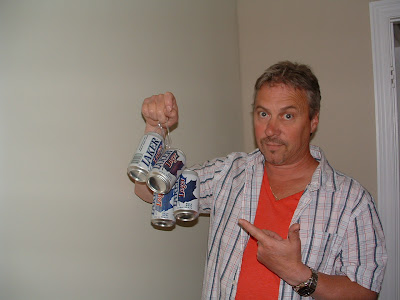 Recalling the experience now, we had an awesome time, one that I'm certain is not experienced by many. I'm thankful for that! And in the end I'd be lyin' if I said I didn't get to hoist a couple of "lakers."

Posted by Severn Soundings at 4:12 PM No comments: