Well, another Canada Day has come and gone. With July 1st falling on a Wednesday this year, we seemed to have varying opinions on when to celebrate it. Some people took the preceding Monday off, making that the long weekend. Some people waited until the Friday after to take their "stat" and some just celebrated on the day.

I knew people from all three camps; so naturally I was obligated to observe the holiday at what amounted to a series of events spanning from June 26th on to July 5th. 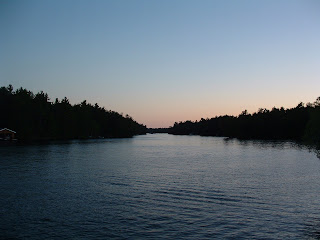 A favourite for most people is the fireworks displays, which can be viewed by all, at a number of local venues. Not the least of which is the yearly display at Lost Channel.


I understand that it is a privately funded event; but from what I hear it is simply spectacular, complete with audio accompaniment.
Most people gather in boats nearby, armed with plenty of snacks and drinks to keep the kids occupied until the show begins.
When the last brilliant display has faded; people "pull up anchor" and slowly and carefully head off into the blackness of the night towards their respective cottages or campsites. 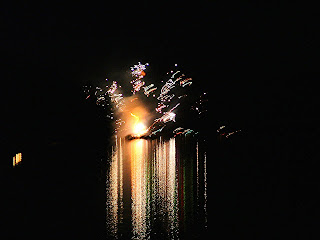 A great evening of family fun being had by one and all !!

Another type of fireworks display is the typical backyard type, complete with screamers, burning school houses and of course the sparklers.
This "up close" display is great and mostly safe when supervised by competent adults.
The trick seems to be to have just one of those aforementioned adults conduct the lighting and of course the safe removal of the spent charges and keep everyone else (especially children and pets) at a safe distance.

That works for most of the contents of your fireworks arsenal, but what about the little hand held sparklers? Which seem to generate "welding rod like" heat and get passed out to the kids like they were as harmless as the little plastic "detergent" bubble makers that we've all seen kids blow through and wave around.

"Since I was just a youngster" (a phrase weighted similar to "when Christ was a cowboy") the sparkler has been the favourite with all children.


Who hasn't witnessed the scene of half a dozen junk food fueled kids running blindly around the backyard followed by barking dogs; (not sure what to make of the commotion); followed by anxious adults, desperately trying to maintain some form of order and keep track of which kid is theirs in the dark.
"No running with the sparklers" "Stop chasing the dog with that" "keep that away from your little cousin's eyes" Watch out for the swing set" "Whatever you do... don't touch it when it goes out"...it's still really hot!!
All of course falling on deaf ears.
I personally have been burnt by a sparkler twice in my life... once as one of those frenzied children and once about twenty years later as an anxious adult sprinting across the backyard to recklessly grab an expired one from the hand of my 5yr old daughter Bobbi-anne as she reached with her other hand to touch it.

I can tell you that twenty years didn't make the little buggers any less hot; that's for sure.

Now another twenty or so years has passed and I guess my next encounter with that heat will likely be as a result of me protecting a grandchild from his or her own curiosity!

You may next year, see the scene repeat itself, complete with frenzied kids, barking dogs and anxious adults, but if it's my family your watching;

I'll be the old guy wearing the welder's mitts.