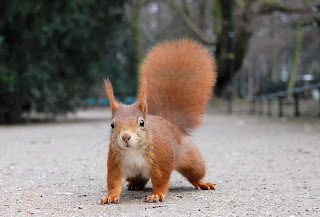 Sipping my coffee this morning and enjoying the warmth of March morning sun, I noticed that the cat was in attack mode and ready to pounce, (if only she could get through the patio door)
Expecting to see some unsuspecting chickadee or the like, I was surprised to see a newcomer to the feeder. A "cute" little fellow, all decked out in his suit of red.
This little red squirrel was quite chipper (not that I've ever met one that wasn't) and in quite good shape, considering the winter we've had.
I later shook out some extra seeds onto the deck for his benefit and for ours too as they are fun to watch feed.
Somehow; I guess because they are smaller than the usual denizens of our feeder (the lumbering big black squirrel) they seem fragile and in need of our support.
After all there even seems to be fewer of them.
But I think that nothing could be farther from the truth. They are known to be very aggressive and territorial (like maybe the "George W Bush of the feeder crowd.)
I know this from personal experiences. Once many years ago and once last fall.
My experience many years ago was to witness an adult red squirrel in an altercation with birds at the top of a Little fir tree next to my driveway. He /or she was at the very top and leaping at and swatting at a pair of what I think were blue birds, circling and diving at him. It was like the "Empire State Building scene" from the King Kong movie. Next I saw what the commotion was about,when during a break in the action, the squirrel went down, perched himself on the edge of the bird's nest and proceeded to pluck the chicks one by one from the nest, bite them through the back of the head and drop them to the ground. When I went over to investigate I discovered the bodies of two more baby birds near the base of the tree.
I remember asking Dad at the time, why the red squirrel would hate the birds enough to do this? And he told me that it was not a result of hate, but simply animal instinct. The territorial instinct of the squirrel is so strong that it's behaviour is merely a reaction to creatures that would compete with it for food. (so unlike King Kong and the airplanes, Faye Ray had nothing to do with this event) It was simply instinct.
The next time that comes to mind, crossing one of these "cute" little red squirrels was last fall when one took up residence in my garage. I noticed him a few times around the yard first, he scolded me and we both moved on. Then I bumped into him in the garage, which startled me and seemed to do the same for him; but as the days went on he began to leap from rafter to rafter knocking things about, doing more charging and challenging than escaping from me.
I cured that behavior with the use of a radio playing loudly and a tune up and test of my snow blower in the garage. He got the hint and moved on to quieter digs.
It was only later while searching for stored Christmas lights that I realized the damage he had done in there. He/ or she had went through that garage like a buzz saw cutting holes clean through cabinets, snow sleighs,tarps,a plastic pumpkin,a straw filled scarecrow, and most of the way through a 2x4 supporting the storage cabinet.
Destructive little beggar eh?
So I'll sit and sip my coffee and marvel at the dexterity of his little hands and teeth opening the bird seeds, but before I head in to my Remax office to begin my day I'll just spy a bit on the little monster to see which direction he/or she leaves in. NOT towards my garage I hope.
Posted by Severn Soundings at 1:03 PM