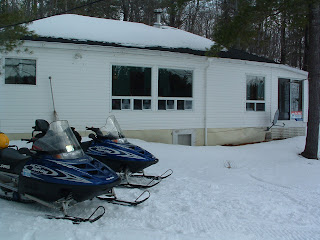 "Well, it seems that winter's finally winding down" and yet, things are not always as
they seem.
A case in point; last year at this time I might have made the same observation and as it turned out, winter "hung in there" well into April.
So better to keep quiet until the robins are back and even then...don't be too sure.
I did, however get a recent phone call from Morley Marchant, a friend of mine whose alot more sure of himself than I. "last day for good snowmobiling this year" he matter-of-factly announced.
"Have you been up and unhooked that dock from the shore yet?...like you said you were." Uh..no..uh Ive been busy ..and waiting for the..uh...
"let's go" he says.
Now the prospect of travelling on late season trails and ice would normally worry me a little, but in this case I'd be travelling with a well seasoned guide.
Well seasoned is probably an understatement in Morley's case, I can't think of anyone more knowledgeable about that part of the Severn River, nearby lakes,and the thousands of acres of crown land surrounding them.
He's about 20-25 years my senior and has spent most of those years living and working in the exact area I just mentioned.
As for the snowmobile trails? He used to operate a groomer on them and runs them now, "pernt-near" daily. "pernt-near" being a Waubaushene term meaning "almost" (go ahead, and use it if you like.)
So I agreed; partly because I wanted to get that dock situation sorted out before the ice goes out, which then surely, damage would be done to it. The other part being because I didn't want to "wimp out". Morley is more than a few years older than I, yet possesses more energy and determination than many men half his age.
So off we went on what turned out to be a great day on the trails and lakes.
We took our time and toured most, if not all the surrounding lakes. Largely uninhabited and accessible only by air or bush trails, they are, and the landscape abutting them, both rugged and beautiful.
With no recent snowfall, I could clearly see the evidence (tracks) of all manner of creatures; winged as well as furry and four legged. Some seemed aimless wanderings in search of food, some seeming like signs of pursuit/escape or struggle and all telling a story of survival in this northern wilderness. The deer are still mostly yarded up and can be seen in abundance along the trail, looking on with cautious curiosity.
After taking what was surely (and thankfully) the long way around, Morley pulled over when we came off the ice at Wood Bay and said "take the lead; next stop Lost Channel". Since we were now in the middle of my "stomping grounds" and I knew the exact location of the dock that was the subject of our quest, I did. 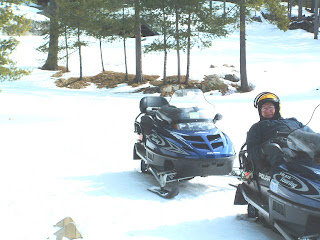 With the dock unbolted and then lightly secured to the shore with nylon rope, we relaxed a bit and then headed off to retrace our path back to Severn Falls.
Sipping a beer and enjoying the warmth of the fire with Morley and his wife Marg, I hesitated, but finally mentioned that I could already "feel that trip" in my shoulders. Morley's response was "What?...but your only a young fella. Wait til you get to be my age and then tell me about your shoulders"
I thought about that statement for a while and then thought to myself, "Yep; I wouldn't be surprised if I do tell him about it then."
Posted by Severn Soundings at 2:10 PM