A FEW WORDS FOR AN OLD FRIEND! 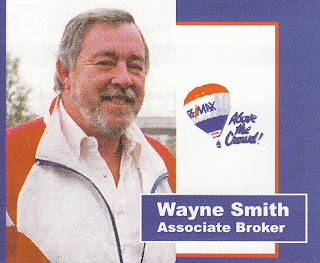 Recently we in Coldwater marked the passing of Wayne Smith. A long time resident and well respected local businessman; Wayne was a 23 year member of the S.G.B.R.E.A. He was an associate broker for many of those years with Remax Georgian Bay Realty Ltd.

I guess you could say he "gave me my start in real estate", or "took me under his wing", "was a mentor of mine"; any of those cliche's probably fit, but mostly I think back about him as a friend. He offered counsel and advice many times during the years that we worked together at times when I sorely needed it. But mostly led by example, in this way he taught me "courage in the face of adversity" as I watched him stoically deal with and never "knuckle under" to a long series of health issues in his later years.
He also taught me, that in business, "always expect the best from people and their dealings with me, but definitely also prepare for the worst."
He would say "That way, you don't get your ass in a sling" (An example of just one of hundreds of colorful phrases and sayings that he had archived and could conjure up and present to you, in assessment of most any of life's situations)
Another Wayne Smith truism that I vividly recall being dealt out to me was as my 40th birthday was approaching. He said; as he looked up from his newspaper and over his glasses, "Don't sweat turning 40! Just wait til ya hit 50 Dougie!....It's a bobsled run to a pine box after that."

Having just recently turned 50 and even more recently dealt with Wayne's passing, I can't say that his words haven't come to mind as of late.

Aside from real estate sales, another of Wayne's keenest interests, shared by his wife Jo-anne as well, was of horses.
Limited as my knowledge was of the subject, I always enjoyed to hear what was happening at the races, the selling of one horse, or the acquisition and track record of another. It was a subject that Wayne was expert in and would "light him up" like no other.
Over the years I believe I met most if not all of Wayne's horse buddies. Co-owners, trainers, drivers, and even a few of the horses.
Most recently it seems that their group has developed a champion. Something that both Wayne and Jo-anne are understandably thrilled with, and proud of. His name is "Armbro Chronicle"

As I now sit and think fondly of the years that I worked with Wayne, I guess I could sum things up by saying "they were good years. Our differences were few and our sales were many!"
I count myself lucky to have known him.
And as for his many quotes and sayings....
"Things just got a little less interesting here in Coldwater with his passing."
He will be missed.
Posted by Severn Soundings at 12:25 PM